What is Cardiac Catheterization? 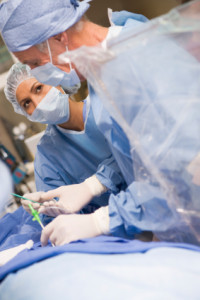 Cardiac catheterization involves the insertion of a thin, flexible tube or catheter, into an artery in the groin or wrist.  The physician then advances a smaller tube to the arteries in the heart.

Dye is injected through the catheter, creating a live motion x ray image of the heart’s blood vessels.

The procedure can be both diagnostic and therapeutic as interventions, such as angioplasty and stenting, can be done during the same procedure.

PATIENT INFORMATION
Multiple factors contribute to the buildup of plaque inside the arteries. Age, high blood pressure, elevated cholesterol, diabetes as well as family factors can lead to progressive enlargement of plaque, narrowing and stiffening the arteries. This process is called atherosclerosis, commonly known as “hardening of the arteries,” because the plaque buildup thickens the walls of the arteries and narrows the space through which the blood flows, reducing the circulation of blood through the area of the body that gets its blood from the artery.

A test called a cardiac catheterization is used to find out the extent of blockage in the coronary arteries.

The most common test that is performed in conjunction with cardiac catheterization is angiography.  A contrast dye is used to produce images of the heart’s blood vessels as it is pumped through the catheter and into the coronary arteries. The physician analyzes the flow of this dye with an x ray machine to get pictures called angiograms.  This can pinpoint the location and extent of problems with the heart’s blood supply and decide on treatment.

PRE-TEST GUIDELINES
Prior to the procedure, the patient should:

People who are allergic to iodine or shellfish, or people with diabetes or kidney problems, may have an increased risk of an allergic reaction to the iodine in the contrast dye and should notify the physician of their allergy before the test. Blood tests prior to the procedure will identify kidney function. The physician can administer medications before the test to decrease the risk of adverse reactions.

WHAT TO EXPECT
Other than a sedative, people having a cardiac catheterization done might not receive any other drugs because some anesthetics can alter how the heart functions. Catheterized patients also need to remain alert so they can describe sensations to the physician performing the test and report any chest pain. The test is otherwise generally painless.

Cardiac catheterizations are typically performed with the person being tested lying flat on a table with an x ray machine above or on the side of the table. The site on the leg or arm where the catheters will be inserted is cleaned and any hair around the insertion point is shaved. This helps minimize the risk of infection. The insertion point is numbed with a local anesthetic, and doctors make a tiny incision in the skin to access the artery.

Once the incision has been made, a guide wire is inserted into the artery. A catheter sheath, a short, hollow tube, is then guided over the wire. When the catheters are inserted, most people feel only a slight pressure or a sensation of mild tugging, but because there are no nerve endings inside the arteries, people being catheterized cannot feel the catheters as they move through the body. Using the fluoroscopy screens, the doctors then guide the catheters through the arterial system to the area of the heart that is being studied.

After taking pressure measurements inside the heart using a catheter-based pressure-recording system, the physician will position the catheter in the aorta at the beginning of the arteries that supply blood to the heart. A contrast dye is injected through the catheter and will flow into the coronary arteries. Many people who have undergone an angiography report feeling sensitive to their heartbeats and a warm, flushing sensation when the dye is injected, a normal reaction that lasts for 20 to 30 seconds. The physician may ask the person to cough to help move the dye through the heart’s arteries. The dye blocks x rays, flows through the heart’s arterial system, and the physician traces its flow with an x ray machine to get pictures of the heart’s blood vessels. More than one injection of dye may be used during an angiography.

When the procedure is completed, the catheter is removed through the sheath at the insertion site. Typically, the sheath stays in the artery for a short time and is covered with a small dressing. The sheath may be left in as a precaution in case any problems such as bleeding, pain, or decreased circulation in the leg or foot result from the catheterization. In the event a complication arises, the physician will have quick access through the sheath to investigate or treat the problem.

When the sheath is removed, pressure is applied on the insertion site for 15 to 30 minutes to allow the puncture area to close and prevent bleeding. When the femoral artery in the groin is used as the access point, the patient may have to rest in bed with the leg held straight for one to four hours. Other techniques that may be used to close the puncture site include a cork-like device inserted into the wound to seal the area or a stitching device with sutures that close the incision and eventually dissolve.  When the radial artery in the wrist is used, a plastic compressive band is applied for 60 – 90 minutes.  Pressure is slowly released and a bandage is applied once it is removed.

Cardiac catheterization usually takes between 30 minutes to 1 hour to complete.

POST-TEST GUIDELINES
Most people can resume normal activities within a few days to a week after their catheterization if no complications result from the procedure. Some guidelines to follow after a cardiac catheterization include:

You call and get a live person.  The staff is so helpful.  You don’t find that in most offices.Andy
Walking into the office is like coming to visit an old friendAngelina
I feel at ease with Dr. Singer.  He listens and explains things so you can understandTom

What Our Patients Are Saying

You call and get a live person.  The staff is so helpful.  You don’t find that in most offices.Andy
Walking into the office is like coming to visit an old friendAngelina
I feel at ease with Dr. Singer.  He listens and explains things so you can understandTom